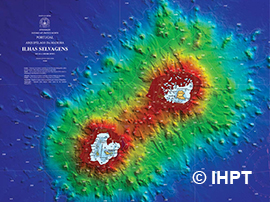 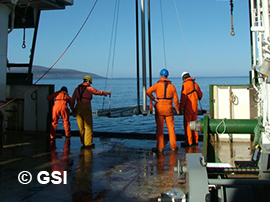 More detailed information on these webservices can be found at the following page.

The OGC web services have the 2018 version of the DTM as their basis. However the layers of the 2016 version have also been included as sub layers. The get capability statement will let users chose which layer(s) to activate.

The WMTS link points to a dedicated information page (https://tiles.emodnet-bathymetry.eu) which gives details about the WMTS Capabilities document and a Demo Viewer for users to try out a selection of the EMODnet DTM layers for European sea regions, the EMODnet Bathymetry World Base Layer (EBWBL) for global coverage, and the various projections supported in the EBWBL WMTS service, The EBWBL service is available in non-projected coordinate system (Lat, Long, WGS84: EPSG 4326), Web Mercator (EPSG 3857), Inspire compliant ETRS-EALA projection (EPSG 3035) and projections adapted to both poles (ESPG 3031 and 3996).

Descriptive information about provided information layers can be found at the following page.

EMODnet Bathymetry has adopted standards for the marine domain that have been developed and are maintained by SeaDataNet. Also several partners in the project are SeaDataNet partners. SeaDataNet has relations with, follows and contributes to international standards committees such as the Open Geospatial Consortium (OGC), International Organisation for Standardisation (ISO) and the World Wide Web Consortium (W3C). And it has an active cooperation and tuning with the INSPIRE community, in particular the INSPIRE team of JRC. The INSPIRE Directive 2007/2/EC aims at establishing an Infrastructure for Spatial Information in the European Community which is supported through legislation and technical guidelines, such as concerning data models (schemas), metadata and network services. More information about the on-going international cooperation and interoperability can be found in a report which was drafted early 2018. Early 2020, an update was released of this report, which can also be downloaded.